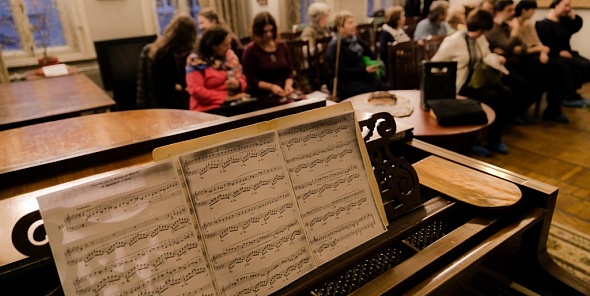 It is located not far from Chistoprudny Boulevard, in a quite Moscow alley - Fuhrmanny, 6.

In this house the artist spent his last three decades of his life (1903-1933). The remarkably preserved building represents a public - house of the beginning of the 20th century, that was built by the project of the architect I.G.Kondratenko.

The inscription on the commemorative plaque, that was established on the 100th anniversary of the birth of the artist, says that the famous artist A.M.Vasnetsov lived, worked and died here. From the end of the 19th century he was known as a great expert and researcher of ancient Moscow.  Moreover, for a long time he was a member and honorary chairman of the commission "Old Moscow".

The idea to establish and outfit a museum appeared in 1956, during the celebration of the centenary of the artist. The realisation of it was made by the support and participation of his relatives. The son of the artist V.A.Vasnetsov placed at the disposal several rooms, including the studio of the artist. As a gift, the museum also received paintings, sketches, drawings, furniture, made according to the drawings of his father, memorial things, books, documents. In 1965 the memorial museum - apartment of A.M.Vasnetsov was opened for visitors. Nowadays it extends its square: it occupies 2 apartments on the same staircase. There are more than 9.000 exhibits, including 200 paintings and more than 1.000 graphic works in the collection.