The Gallery’s main building is on Lavrushinsky Lane in the Zamoskvorechye district where merchants traditionally settled in the 19th century. The Tretyakov family bought a house on Lavrushinsky Pereulok at the end of 1851.


Pavel Tretyakov purchased the first paintings in 1856 which formed the basis of the famous collection. As his collection grew, special outbuildings were built as wings attached to the main building’s living quarters to accommodate additional works of art. When Pavel died (1898) the building was redesigned by the architect V.Vasnetsov (1902-1904) and thus the private house was transformed into the great museum we see today which has been visited by numerous generations since that date.

Vasnetsov's project of the facade

The Tretyakov Gallery on Lavrushinsky Pereulok is a huge museum complex today.
The Gallery’s historical building, houses Russian art from the 11th to the early 20th centuries. On display in the Old Russian Art section are icons by both unknown and famous icon painters from the 12th-17th centuries (including Theophanes the Greek, Andrei Rublev and Dionysius). The halls of the 18th – to the first half of the 19th century, display paintings by famous Russian masters, such as F.Rokotov, D.Levitsky, V.Borovikovsky, K.Bryullov and A.Ivanov… 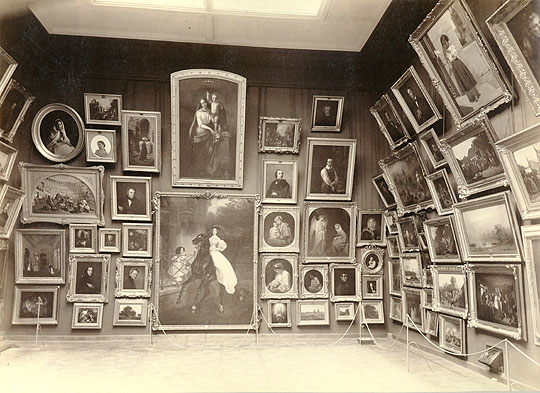 The Gallery holds a wide-ranging collection of Russian Realism from the second half of the 19th century. Its masterpieces include famous paintings by I.Kramskoy, I.Repin, V.Surikov, I.Shishkin, V.Vasnetsov, I.Levitan and many others. The brilliant display of works of art from the turn of the 19th-20th centuries include pieces by M.Vrubel, V.Serov, masters of the World of Art, Union of Russian Artists and the Blue Rose groups.

Many exhibits are not only amazing works of art, but are also records of historical events. The collection includes a unique Byzantine mount from the late 13th - early 14th century for the Russian "Virgin of Hodegetria" icon (late 15th-early 16th century) which was kept in the Trinity Monastery of St Sergei - most probably by Sophia Paleologue. The embroidered "ubrus" and "podvesnaya pelena" were made in the 16th century in the sewing rooms of Anastasia Romanovna – Ivan the Terrible’s first wife. They were given as ‘offerings’ by the Tsar and Tsarina, to the Suzdal-Pokrovsky monastery as supplication for an heir. They adorned the venerated icon of "Our Lady with Child" which was also decorated with a pectoral cross, a precious tsata and a tiara and necklace dating from the 17th century. Works by these old Russian masters impress not only by their expression of deep piety, but also by the intricate detail of the works.