Pilgrimage of Russian Art. From Dionysius to Malevich 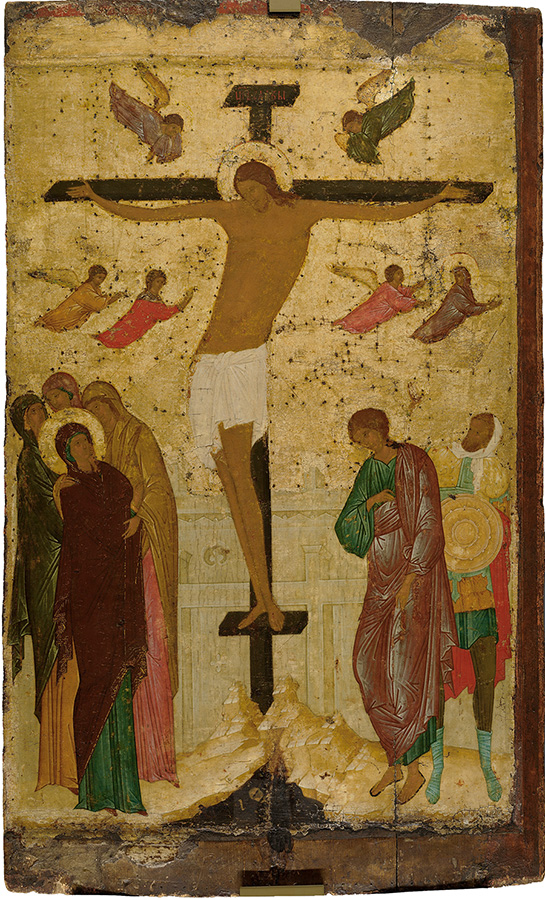 Masterpieces from the Tretyakov gallery and other Russian museums


In Autumn 2016 the Tretyakov gallery hosted an exhibition “Roma Aeterna. Masterpieces of the Vatican Pinacotheca – Bellini, Raphael, Caravaggio”. It was the first time so many as 42 outstanding masterpieces of XII-XVIII centuries had left the Vatican museums’ permanent collection. That exhibition was a remarkable event in the world of art.

In return, the Tretyakov gallery and Alisher Usmanov’s charity foundation “Art, Science and Sport’ are opening an exhibition on November 19, 2018 in the Vatican Museums. The exhibition will be held in Braccio di Carlo Magno in the gallery of Bernini's colonnade in St. Peter’s Basilica. The backbone of the exposition are pieces from the Tretyakov gallery, however, there is a number of works from other Russian museums.

The exhibition is a response to the generosity of the Vatican Museums. The curators have set a goal to create an exhibition as remarkable in the selection of works and significant for the society as the one in Moscow was. It is a cultural message from Russia to the Western Christian world. According to the curator, the exhibition looks into the diversity of Russian perception of art and points out at the succession of spiritual traditions, an inner and deep connection between icon-painting and Russian realism of the 19th century. While preparing the exhibition an original and ground-breaking concept emerged and there was a selection of works of exceptional value and significance.

In many aspects it is a watershed for the Tretyakov gallery. It had been decided to give up a chronologic order in presenting the exhibits. There is a dialogue between two traditions in history and art: early Russian art and the art of XIX-XX centuries. The idea of the exhibition is to reveal the interconnection of these art periods. They say that the ruling of Peter the Greatest is a crucial moment which divided the history of Russia in Pre-peter’s and post-Peter’s times. This exhibition is to unite these epochs. Unexpected but obvious analogies and comparisons prove that Russian art is an integral entity throughout centuries.

There are connections that did really exist: some ideas were followed by painters consciously, some emerged spontaneously with the help of the cultural codes. In order to back up this concept there are unsurpassed masterpieces presented. Mostly these are paintings by the Wanderers who turned to Gospel subjects and religious themes. These are famous works from the permanent collection which have already been widely exhibited. However, the structure and the concept are pioneering. For the first time so many prominent works have simultaneously left the Tretyakov Gallery.

From the painting “The Apparition of Christ to the People” by A. Ivanov we can trace the redefining of values in Russian art. In the second half of 19th century, at the time of positivism, enmity against God and the time of God-seeking, global transformations being distanced from the Church helped to see the Gospel from another angle. Such topics were instrumental in finding answers to topical issues of that time – what a person’s place in the world was, how he was related to God and what the point of his life was.

There is a harmonious combination of early icons and XIX-century paintings that symbolize the time of enmity against God and the time of God-seeking. “The Apparition of Christ to the People” by A. Ivanov presented next to the XV-century icons such as “The Epiphany (Baptism)” and “The Transfiguration”. “Inconsolable Grief” by I. Kramskoy is opposite to the pieta icon “Weep Not for Me, O Mother”, “Christ in the Wilderness“ is shown next to a XVIII-century sculpture from Perm “Christ in a Cell (Seated Saviour)“. “Life is Everywhere” by N. Yaroshenko is close to “Theotokos Kikkotissa” by S. Ushakov, corresponding to the shape and the colours of the icon; XVI-century “The Last Judgment” is next to “Black Square” by K. Malevich. The final exhibit is “The Bearing of the Cross” by M. Nesterov and XVI-century icon “In Thee Rejoiceth” epitomizing the spirit of Russian “sobornost” (collegiality) in the Church and the State.

Among other iconic paintings that have left the Tretyakov gallery to be exhibited in Vatican there are ‘Unexpected Visitor”, “Religious Procession in Kursk Province” and “Before Confession” by I. Repin, “Troika. Apprentice Workmen Carrying Water” and “Drowned Woman” by V. Perov, “Quod Est Veritas? Christ and Pilate” and “Golgotha” by N. Ge, “Demon (Seated)” by M. Vrubel, “Trinity” by N. Goncharova, “Moscow. Red Square” by V. Kandinsky, “Bathing of a Red Horse” and “1918 in Petrograd” by K. Petrov-Vodkin.

There is only one portrait exhibited. It is “Portrait of Fyodor Dostoevsky” by V. Perov, significant for Russian culture. It obviously corresponds to the image of “Christ in the Wilderness” by I. Kramskoy. Images typical of Russian history also feature the exhibition. There are priests, hermits, God’s fools, travelers who defied the spiritual way of Russian culture. Connection between art of different epochs is instrumental in triggering further speculations on Russian art.

This exhibition is one of the most significant global projects by the Tretyakov gallery, which is unprecedented in its message.

Such exhibitions as “Roma Aeterna. Masterpieces of the Vatican Pinacotheca – Bellini, Raphael, Caravaggio” and “Pilgrimage of Russian Art. From Dionysius to Malevich. Masterpieces from the Tretyakov gallery and Russian museums” and publishing catalogues would have been impossible without the support of Alisher Usmanov’s charity foundatiom “Art, Science and Sport”. There is a long history of its collaboration with the Tretyakov gallery: in 2006 foundation supported events that marked the 150th anniversary, in 2006-2007 there was a successful team work on James Whistler exhibition, in 2007 they worked on James Whistler’s retrospective. In 2016 exhibition “Roma Aeterna. Masterpieces of the Vatican Pinacotheca. Bellini, Caravaggio, Raphael” was organized in collaboration with The Fund. In 2017 the foundation supported a large-scale project on implementing new technological systems in the Tretyakov gallery.

“It is a great honor for the charity foundation “Art, Science, Sport” to collaborate with such projects which are social responsible for bridging the gap between different cultures. There have been strong connections between the art and history of Russia and Italy for a long time. In 18th century the best students of Imperial Academy of Arts underwent an internship in Italy. The most prominent Italian architectures unsurpassed palaces enriching Russian architecture and blending both Russian and European traits. Russian and Italian paintings which are obviously connected are equally highly praised in both countries. I think all abovesaid is a key to success of such joint projects”.

The State Tretyakov Gallery, an internationally-acclaimed museum of vast renown, is also a major scientific, cultural, educational, and research complex in Russia. Ever since 1856, when merchant and museum benefactor Pavel Tretyakov first began acquiring his private collection, the Gallery has evolved over a century of war, transportation, renovation, and expansion, into the largest archive of Russian art in the world today. With over 190,000 paintings, sculptures, relics, and graphic works housed among several illustrious buildings across Moscow, the Gallery’s collection not only remains the ultimate historical resource for Russian art, but also stands testament to the changing tides of Russian life itself.