The New Tretyakov Gallery at Krymsky Val is about to open a new chapter in its operation. The Free Flight exhibition project inaugurates the Museum’s exhibition program at a brand new venue: the West wing of its building previously occupied by the Central House of Artist. It is here that the New Tretyakov Gallery is planning to hold its future large-scale interdisciplinary shows that would explore the most relevant issues and topics through innovative artistic means and media.

The Free Flight show is a result of collaboration between the Moscow-based AZ Museum and the State Tretyakov Gallery. Dedicated to the creative legacy of the renowned filmmaker Andrei Tarkovsky and of the Soviet Nonconformist artists, it seeks to present the non-official art of the 1960-1980s within the context of Tarkovsky’s cinematic universe.

From the point of view of layout and architecture, the exhibition has been specifically designed to fit the the West wing wing of the New Tretyakov Gallery building and is meant to become one of the most ambitious and impressive shows of non-official artist to date. The Free Flight is a culmination of a long and extensive project conceived of and carried out by the AZ Museum, a trilogy of shows dedicated to the legendary cinematographer and the artists of his day and age. The trilogy encompassed the show “Foresight” (2016) held at the Stanislavsky Electrotheater in 2016, via the “Breakthrough into the Past” (2017) shown at the State Theater of Nations (new venue) and ultimately, “The New Flight to Soliaris” that was exhibited at the Franco Zeffirelli Foundation in Florence and the Royal Villa of Monza in 2018 to wide critical and public acclaim with more than 200 publications in the media.

Importantly, the new exhibition, Free Flight, is more than simply a sum total of the three earlier shows merged together under the same roof, but an independent project that offers new insights into the subject and presents novel artistic solutions.

Tarkovsky’s creative pursuits, his personality and legacy were of an enormous import for the Soviet cinematography of the 1960-1980s, and had a great appeal for the artists of his time. Moreover, his films are also crucial for the study and true appreciation of the late 20th century European culture. Tarkovsky’s creative output reflected and expressed the spiritual and intellectual ideals of an entire generation, but it also shaped the very scale of artistic values and allowed the viewers and students of his oeuvre to touch upon the new and oftentimes forbidden themes and meanings that were important to the public behind “The Iron Curtain”.

The scope of ideas and images evoked and explored is what unites Tarkovsky’s filmmaking and the artworks of Soviet non-conformist artists that forged a specific artistic phenomenon called “the Soviet Renaissance”, an extraordinary outburst of non-official art and creativity.

Although Andrei Tarkovsky barely ever crossed paths with any of the artists included into the exhibition, there are obvious affinities between their works. Thus, the Free Flight seeks to introduce the viewers to the world of complex allusions and paradoxical juxtapositions of Andrei Tarkovsky’s cinematic imagery on the one hand, and the paintings, drawings and sculptures of the most eminent Russian artists of the second half of the 20th century as well as with contemporary media- and video-art. These underlying correlations, similarities and overlaps demonstrate that the art that touches upon the “big” existential issues while raising pressing questions of the day can hope to truly transgress the constraints of genres and media.

The structure of the project is built around three famous films of the master: Andrei Rublev, Stalker and Soliaris. It is noteworthy, that this year marks the 50th anniversary of Andrei Rublev’s premiere at the Cannes Film Festival and the 40th anniversary of another one of Tarkovsky’s masterpieces, Soliaris. In each of his films the famed director constructs an entire artistic universe full of complex meanings, references and symbols that have been studied and variously interpreted by many a generation of scholars and film critics ever since.

The vast (3,500 square meters) space of the West wing at Krumsky Val is about to be transformed into a ‘total’ installation that encompasses around 70 pieces from Natalia Opaleva’s collection. Among them there are artworks by Anataloy Zverev, Dmitry Plavinsky, Petr Belenok, Vladimir Namukhin, Lidiia Masterkova, Vladimir Yakovlev, Vladimir Yankilevsky, Francisco Infante-Arana, Yulo Sooster, Ernst Neizvestny, Oleg Tselkov and Dmitry Krasnopevtsev. Platon Infante-Arana created a new video-artwork specifically for the Free Flight exhibition. Media-artist Alexander Dolgin worked on the content for 15 projection screens and more than 10 large-screen plasma displays.

The sheer scale of the project and the cutting-edge technology employed in the making of it, follow the curatorial logic of Polina Lobachesvkaya and the seamless stagecraft and design elaborated by Gennady Sinev that assign a particular direction to the movement of the viewers as the latter explore the grounds of the West wing.

The visitors are expected to pass through three sections of the project: from the spiritual landscapes of Andrei Rublev and the images developed by Dmitry Plavinsky consonant with Tarkovsky’s cinematographic imagery, to the apocalyptic visions of Stalker and Pyotr Belenok’s picturesque eschatology to finally arrive at the futuristic interiors of Soliaris filled with artworks directed towards the future of humanity. Courtesy of the Dva Andreya / Two Andreis foundation, the exposition also includes rare and unique archival materials.

Visitors will also have a chance to watch Irakly Kvirikadze’s film New Flight to Solaris, an homage to the project and its participants.

The inauguration of the show will also see the release of two publications: an exhibition catalogue in English and Russian, or rather a guidebook of sorts that includes key exhibits with detailed annotations, and a new book by film scholar and critic Andrei Plakhov dedicated to the trilogy of Tarkovsky’s film that form the three pillars of the exhibition and more generally, to the main artistic milestones of the second half of the 20th century.

The State Tretyakov Gallery is Russia’s first art museum with its very own movie theater (founded more than three years ago inside the Engineering building at Lavrushinsky lane) to launch a sophisticated film programs that explore the links between fine arts and cinematography. That is why the State Tretyakov Gallery places an enormous importance on the realization of the Free Flight project.

Inside the cinema hall, which is part that of the exposition, visitors will be able to learn more about the making of the project. Within the framework of the show, the New Tretyakov Gallery movie theater has already scheduled screenings of Tarkovsky’s oeuvre and a special film program designed by film scholar and critic Andrei Plakhov. 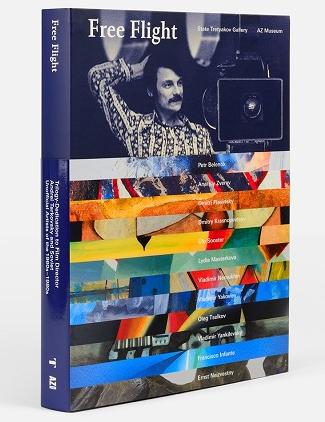